Developing the AI for a simulation game, my friend and I noticed that behavior trees tend very fast to become quite complex and unmanageable. We also noticed that we need to repeat several times the same nodes in the same order with different parameters, which leads to the necessity of several cut and paste operations that are not only boring, but also prone to error.

We started to look how we could reduce the extent of our behavior trees using the tools provided by the engine. The “Run Behavior” node is the nearest to what we were looking for, but it doesn’t allow to pass parameters and needs the same blackboard as the calling tree. This implies that to have the exact same behavior  with 2 different objects (for example transporting an object from one place to another, verifying that the 2 places are free from other bots and eventually waiting in a queue), we should write 2 different “Run Behavior” nodes. In a complex world with a lot objects to manage and different actions to accomplish this isn’t an optimal solution.

So, we came out with the idea of developing a new node which is basically a “Run Behavior” with parameters; we call it “Call Behavior”. The behavior tree asset that you call through the “Call Behavior” node has a different blackboard than the calling tree. This allows to re-use these behavior trees in different places, exactly like functions in programming languages. 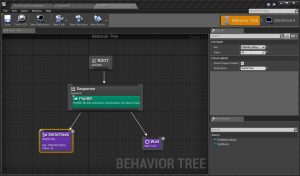 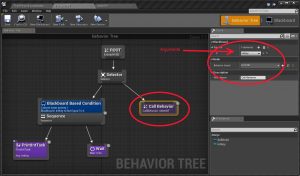 A service that calls the PopBlackboard function is necessary at the top of the behavior function. 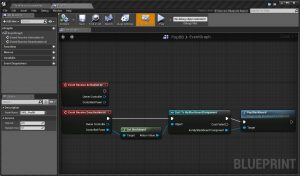 An example project can be found here

The execution will do nothing spectacular, just print “42” to the log (But 42 is the answer to all questions, isn’t it?).

To try Example 2 change Run Behavior asset parameter in Bot blueprint to Example2BT.
In this example the bot brings boxes to player. The example uses a behavior function TransportBF which makes two calls to another function called MoveBF.

You can download the code from github
We added three classes to our code:

More interesting is the MyBlackboardComponent class.

Here we add a few functions

This function is  very similar to the InitializeBlackboard function.
Essentially :

This function called by a service when exiting the Call Behavior node restores Blackboard Data and observers.

In the BTTask_CallBehavior class we add  a new array

that allows us to pass the parameters to the node, then override the InitializeFromAsset and the ExecuteTask functions in order to use the PushBlackboard function of MyBlackboardComponent.